About the Cadillac Lakes Cruise 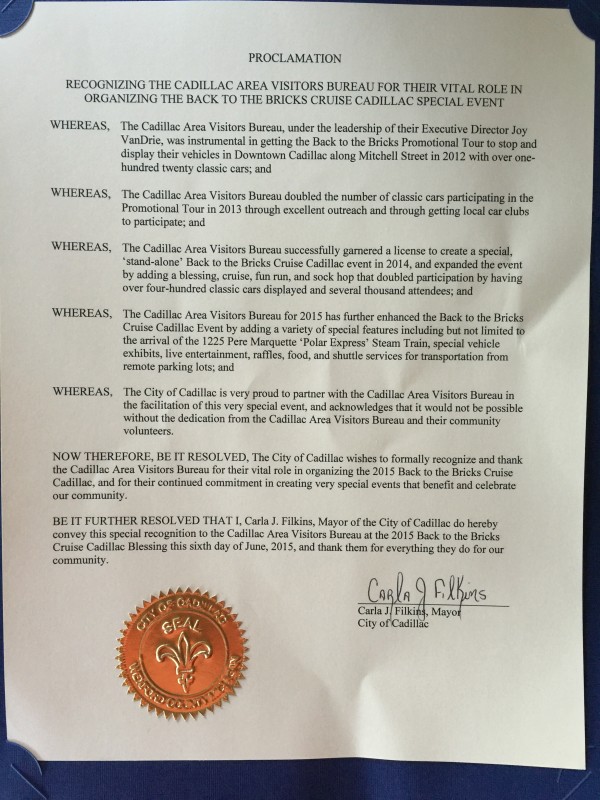 The Back to the Bricks Promotional Tour stopped in Downtown Cadillac, for our first year as part of the statewide multiple day tour. The Cars came into town and displayed on Mitchell Street from 3-7pm, on Monday, June 11, 2012. For the first time in 20+ years, we closed off Mitchell Street to thru traffic, and rolled out the red carpet! We hosted over 120 classic cars from the Promotional tour and locals.

Then, in 2013 the second year on the Promotional Tour, we hosted the group from 3-7pm, on June 9 (Sunday) from Cass Street to Pine Street. This was the second time in 20 years we shut Mitchell Street down for an event and again, downtown rolled out the red carpet! Over 240 classic cars arrived, local residents, visitors and local car clubs joined the Back to the Bricks Tour for a great afternoon downtown.

So, when we heard that they where not coming north in 2014, we brainstormed and the Licensing contract was approved. We would host a ‘stand alone’ Back to the Bricks – Cruise Cadillac’ and it was such a huge success. We added a Saturday Blessing, cruise, area fun run tour, and a sock hop that pulled in over 200 classic cars. Then we shut main street down again to host over 400 Classic cars, with an amazing 5-6,000 people walking the show area throughout the day Sunday!

In 2015 and 2016 we extended the road closure north on Sunday, and added some excellent entertainment and enhancements to the Saturday events including the 1225 Pere Marquette Steam Train. Despite the rain on Sunday we had over 400 registrants for the weekend and had over 100 cars register on-site Sunday.

We also received a Mayor’s Proclamation in 2015!

In 2017 we extended the show further north on Mitchell Street, while the weather was not fully cooperative, we hosted 200+ cars that year.

In 2018 we added a Motorcycle Show to the mix in the Cadillac Commons area, with great success. The event hosted 450 registered cars, with several along the streets without registration numbers J

At the end of 2018 the Five Year Licensing contract expired for Cadillac to use the name/likeness of the Back to the Bricks name. We want to thank the City of Flint and her residents for allowing us to tap into an awesome brand and build our show here in Cadillac. We now have over 750 registered classic and cool car owners to tap into, and are excited about the new opportunities ahead on our own.

We had 475 register in 2019, with over 300 attending Saturday, and 350 on Sunday. The New Name was a hit, we sold out of T-shirts early on Sunday and had just a few sweatshirts left at the end of the event. In 2019 we moved the Blessing and Cruise from morning to mid-day, which worked out quite well and showcased ‘Sadie’ the 126 Steam Train and 45 minute rides for over 1,000, both days, over the weekend from the Michigan Steam Train Institute. To make this is such a successful event we partner with non-profits to provide over 100 volunteers, equating to $4,900 in donations back to those organizations from the event – we are very proud of that! We continue to be very blessed with great sponsors that allow us to offer this event FREE to our registrants and all spectators. So, look forward to hearing about what we will be enhancing further this next year to make it even better!